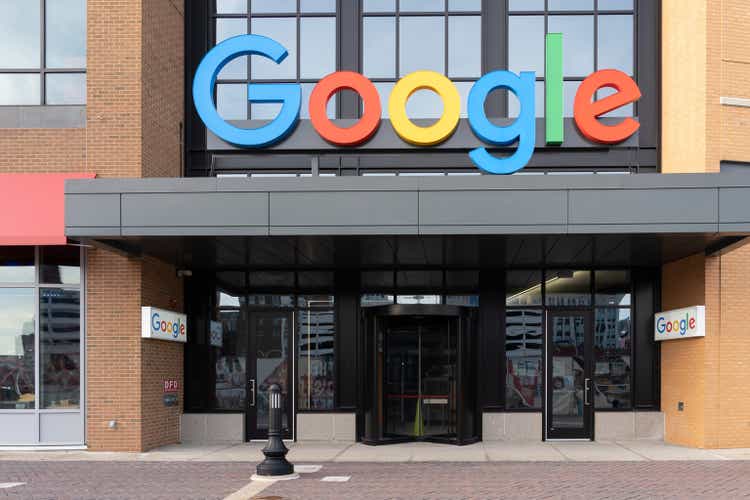 Google and the recession in the advertising market: are the consequences so bad? (NASDAQ:GOOG)

Alphabet Inc. (NASDAQ:GOOG, NASDAQ: GOOGL) (“Google”) is at the forefront of the growing online advertising industry; the company has an impressive list of promising projects. However, the medium-term economic agenda is likely to be a headwind for the company’s operations. results, as Alphabet’s core revenue comes from the advertising business. According to our forecast, the major pressure on financial results will be exerted in Q4 2022-Q1 2023, negatively affecting the company’s share price. Therefore, we believe it is worth waiting for a more attractive long-term entry point.

For a long time, the online advertising industry has exceeded the expectations of analysts and business leaders, with high annual growth rates. It was driven by an increased focus on the e-commerce industry and the general digitalization of global consumption patterns. However, the first half of 2022 has already made it clear that such high growth rates cannot be sustained for too long.

The pressure on consumers, combined with high cost inflation, has forced advertisers to reduce their budgets. Large companies, whose businesses are largely driven by ad revenue, have flagged challenges in investor reporting (including Meta Platforms (META), Snap Inc. (SNAP)). The slowdown in MAU growth was not as steep as analysts had expected after the first quarter, but we believe the main challenges for the business are still ahead.

According to Zenith’s recent forecast, in 2022 global online ad spending is expected to increase by 8% (1.1% less than the agency’s December 2021 forecast). However, we expect the fourth quarter of 2022 and the first quarter of 2023 to be the toughest times for the company. We believe that the main growth has already taken place in the first half of this year.

Although online advertising has now greatly replaced other forms (e.g. television, radio and banner advertising), it is still a relatively young market, so it has not again undergone serious stress tests in a difficult macroeconomic environment. We believe the dynamics will be similar to what we saw in the broader U.S. ad market in 2008-09 (ad budgets were down 8-10% per year, according to Statista), but the market decline will be less strict. because the industry has relatively weak geographical constraints (the drop in activity will be partly compensated by smaller and fast-growing markets) and the duration of the recession will be shorter. We expect the decline in advertising budgets to reach -4.98% YoY in Q4 2022 – Q1 2023.

Another significant issue for ad agencies that offer their services globally (Google, Meta Platforms, Snap, etc.) is the high dollar exchange rate against other currencies at the moment. Since the majority of online advertising is in the United States, and this market is national and largest, the majority of business spending is dollar denominated. However, the income of foreign customers comes mainly from local currencies.

Given the current global economic climate (particularly in Europe, the second largest market), we expect the dollar to be strong against other currencies in the near term, creating additional challenges amid the declining CPC (cost per click) and CPV (cost-per-view) metrics in the global market. The short-term margin of online advertising companies will continue to decline based on revenue volume. Moreover, even though many of these companies have already announced the suspension of aggressive recruiting, the effect will take time to occur and its real magnitude will not be too great.

Advertising demand is about to pick up

Previously, we have already mentioned that the main problem in the economy at the moment is the decline in real income due to runaway inflation, but we expect the rate to stabilize in 2H 2023, when the Fed implements a more accommodative monetary policy.

We believe that as in 2020 the cash injection will drive consumer activity, the marginal effects of customer ad spend will likely increase, leading to growth in CPC, CVC and advertiser counts.

Given the expected decline in the advertising market in the fourth quarter of 2022, the slowdown in the projected growth rate in 2023, the effect of the current exchange rate and the lower CPC, we have conservatively revised our forecast for the Alphabet’s EBITDA.

Based on our forecast, the company’s stock price is $130.0 per share, we consider the current market price to be fair and have revised the company’s rating to HOLD. On the rise – 13%.

We think Alphabet is a good choice for long-term investors, but the short-term difficulties seen in the online advertising market could lead to lower prices after a poor report, presenting an opportunity to buy the stock. at a lower price. We recommend investors with Alphabet in their portfolio to hold their position or reduce it to more conservative values, while those simply considering buying the stock should wait for a more attractive market price.

To effectively manage the position, one should keep an eye on Alphabet’s financial data, reports from other companies in the industry, and industry reports (e.g. Dentsu, Zenith).

Ronnie Teja: the man who made a fortune in e-commerce

2 Best Stocks to Hold Throughout the Bear Market